What I know: 1) Call center in Pakistan. False pretense of operating in the U.S. 2) Play the same scam under many names (BrandedLogo, Logobench, VideoJeeves, Logo Sanctuary, etc) 3) They are being investigated by Federal law enforcement, although no arrests have been made to my knowledge 4) Farhaad Sheikh of Pleasanton, CA is one of the owners/founders. I hope this helps. I wish I had this information before I was ripped off. I just hope the police catch up with them before too many other people get burned.
….

I have done some research and come to find out …


In the UK, there is a business registered as Logojeeves Ltd, under the name Waqar Khan, at the address Saunders House The Mall London W5 3TA. It says that Waqar lives in the United States and is a Citizen.


USA, UK, and Pakistan forces are investigating and we have case numbers. If you have any questions or concerns, feel free to contact me. (my contact information has already been blasted across the internet) We ask that if you have been a victim of fraud by any of these companies or affiliates, please provide me with information so I can forward to all the authorities.

For more Reviews of BRANDED LOGOS:

https://www.yelp.com/biz/branded-logo-designs-sunnyvale?osq=branded+logo
Posted by Robert at 12:33 13 comments:


Halifax, the bank, that likes to portray itself has a friend to the customer is anything but.

The sorry tale began when I wanted to set up an ecommerce website selling JEWISH, JUDAICA products.  Supporting the nation of Israel and selling products in line with my religious faith was the ideal thing for me.

I decided to go with BRANDEDLOGOS that advertise a good service, with a local address in Birmingham and an 0800 telephone number.  Like so many have read or heard so many stories of people loosing thousands of pounds to foreign companies, I was determined to use an authentically British company.

This was a big mistake.  The company is in California, United States, not British at all.

It all went well for a week  with the design team designing a logo.  They had used a logo generator much like anyone can use on the Internet. The design then  wasn't outstanding but anxious to get the website going, accepted one of the designs.  During one telephone call this American voice tried to sell me copyrights to the logo over $300. He claimed only he could copyright the logo. He was insistent and wouldn't get off the telephone. Finally snapping at him, told him blatantly that I am not prepared to pay out any more money. I have paid enough.

Two weeks had gone by and there was no contact from the Project Manager or anyone at the company.  I tried to contact them but they never responded.

Realising this company was foreign I was anxious not to get conned.

I immediately contacted HALIFAX who investigated the matter.  The very next day they had refunded my money. 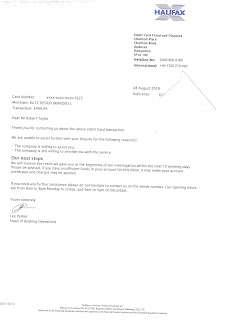 Today, a month later, they have written to me to say that they are refunding BRANDEDLOGOS the full amount of £499.99.  Cannot understand why Halifax wants me to refund this rogue of a company from India, Fremont, USA.  I can ONLY come  to the conclusion it is because I wish to sell JEWISH PRODUCTS,

I will add that people in the United States have received REFUNDS from their Credit Card company and have not had this amount of hassle.

Merely speaking to BRANDED LOGOS on the telephone shows you what type of people we are dealing with.

Halifax told me that VISA had overturned the decision and decided to refund the money back to Branded Logos.  Visa prefers crooks rather than kosher products.  You have no protection with VISA, the next time you use it, think about the people who loose their money.

I am without an Ecommerce website, and HALIFAX have decided to give my money away to them because the company states they still intend to provide a service.

The company only contacted me when discovering the bank would refund the money.

The irony is BRANDEDLOGOS promise a full money back guarantee   Something they have not honoured.

Now I have no Judaica website..  Thank YOU HALIFAX.

Nice to know you agree with con men, tricksters and allow fraud.